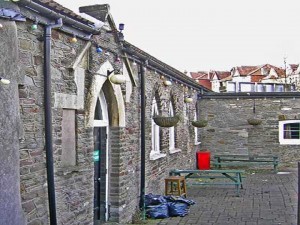 The original church in Kenneth Road 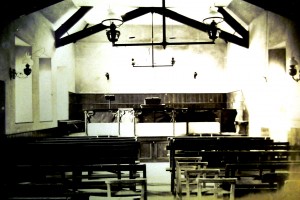 Inside the original church 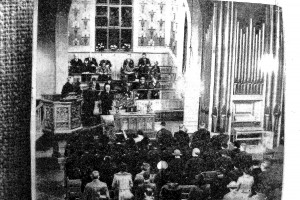 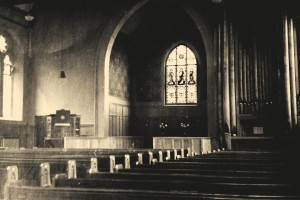 The old Congregational Church before the alterations which give us the church of today.

The Church traces its origins to 1796, when a small group of Independents felt the desire to hold Non-Conformist Worship in the village of Brislington. At the time it was necessary to obtain permission to hold such gatherings from the Bishop of the See as Brislington was then a small village in North Somerset, application was made to the Bishop of Bath and Wells, a license was granted by him in May 1796.

The two prime movers in the venture were Thomas James a local builder and John Tompkins a local farmer [owner of Langton Court Farm]. A descendant of John Tompkins was Oliver Tompkins, the Bishop of Bristol in the 1960’s and 70’s

The original Church building where Worship was conducted was a small stone structure erected by Thomas James himself, sited at the rear of what was the Hollybush Inn in Brislington, but is now a block of flats.

There was no permanent minister throughout the 19th. century. In 1827 it was necessary for the building to be enlarged to accommodate a growing congregation. In 1880 a Sunday School was started and the same year a Church covenant was drawn up and agreed by the worshippers. This was to form the basis in 1881 for the formation of a Union Church which they called ‘The United Christian Church Brislington’. In 1894 the Chapel caught fire and was burnt to the ground, but undaunted the congregation had it rebuilt and it was reopened 6 months later.

As the 20th century was approaching so were the City of Bristol boundaries, which before long were to encompass the village of Brislington. So looking forward the Church decided to become part of The Congregational Union and with there help a new larger Church building was erected on the corner of Wick Road and the Bath Road. This was opened in October 1901.

In 1902 the Church called its’ first minister the Rev. Ignatius Jones. Since then there have been ten further ministries and one assistant ministry.

In 1904 the Grove House came on to the market. This house was situated just a few yards down the road from the Church and presented the Church with ready made premises to house the Sunday School and other meetings, so it was purchased and a Hall was erected alongside the house. These premises were to be used by the Church for the next 76 years.

In 1908 the Church building was extended and a Chancel and vestries were added.

In 1922 a recreation ground was leased, sited on the corner of Stockwood Lane and the Bath Road [which now, is the Park and Ride] a recreation club was formed, embracing Tennis, Hockey, Football, Cricket and Croquet.

In 1980 the Grove building was becoming an increasing drain on finances, so it was decided to sell it and plan to redevelop the Church building. The first phase was to put in a new floor, dividing the building into an upstairs Worship area and downstairs, a hall, kitchen and meeting rooms. Later a lift was installed for elderly and infirm people to gain access to the Worship area.

In 1990 the Church covenanted with the Churches in Brislington and St. Annes to form an L.E.P. This has since ended, and the Church is now part of the “Together in Christ” links.

The Church has always been involved with the community, in the First World War wounded soldiers from local hospitals were regularly entertained at The Grove, and during the second World War The Grove was an Air Raid hostel for bombed out families.

Every Christmas starting in 1965, presents for all the patients at the Purdown Mental Hospital were distributed by members of the congregation , and then in 1968 until the closure of the Hospital in 1990, a coach load of the patients came and participated in our Christmas Festival Service, and indeed joined us in other Festival Services at other times of the year.

The land at the side of the Church has been turned into small allotment plots. Two of which have been given to local Schools, Holymead Infants & Holymead Juniors for their use.

Currently the Church is a joint pastorate with Whtichurch U.R.C. under the ministry of the Rev.Sian Collins.